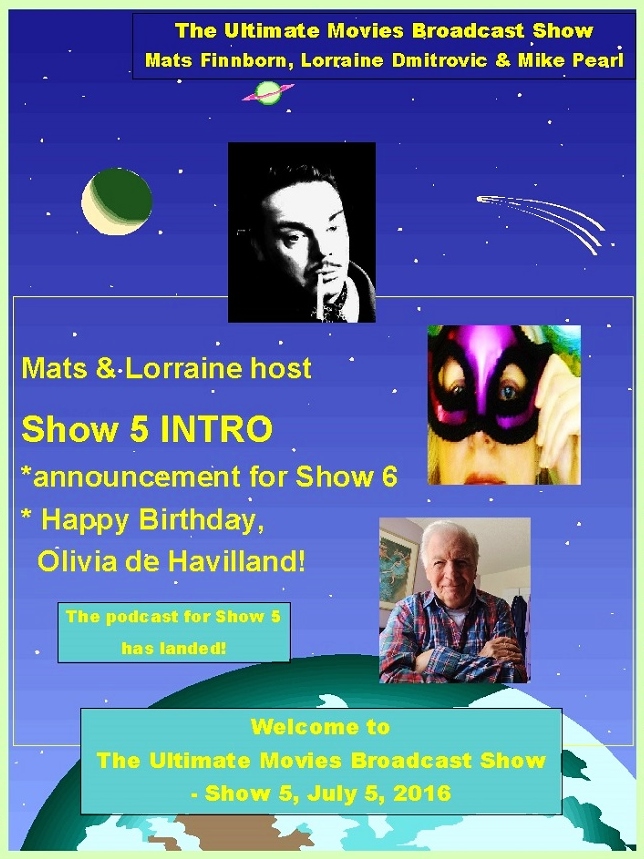 The Mini-Show 5 podcast has landed!
Lorraine D in Canada and Mats Finnborn of Sweden host The Ultimate Movies Broadcast Show, highlighting the best of the world of film – past and present, the classic and offbeat, including once-minor films and genres that have stood the test of time and are gaining new audiences today.

Featured this month:
* Intro with Lorraine D and Mats Finnborn

Many kind thanks to accordionist Matt Tolentino for permission to use an excerpt from a performance at the Bavarian Grill in Plano, Texas in 2011 as theme and background music for the podcast serial The Adventures of Herr Mann & Portulaca. Matt is also leader of the 4-piece ensemble, The Matt Tolentino Band, a 7-piece polka band The Royal Klobasneks, and an 18-piece orchestra called The Singapore Slingers, which has been named the “Best Pre-Swing Jazz Orchestra” in Dallas.

*In the feature interview part 2, Lorraine speaks with Joan Van Houten, who works with The Voice of Innocence group, and is the stepdaughter of a wrongfully convicted man, Mike Johnson, whose case is included in the upcoming The Reporters Inc. documentary, The Innocent Convicts. The documentary is scheduled to air on PBS and other stations/venues at some point in the future.